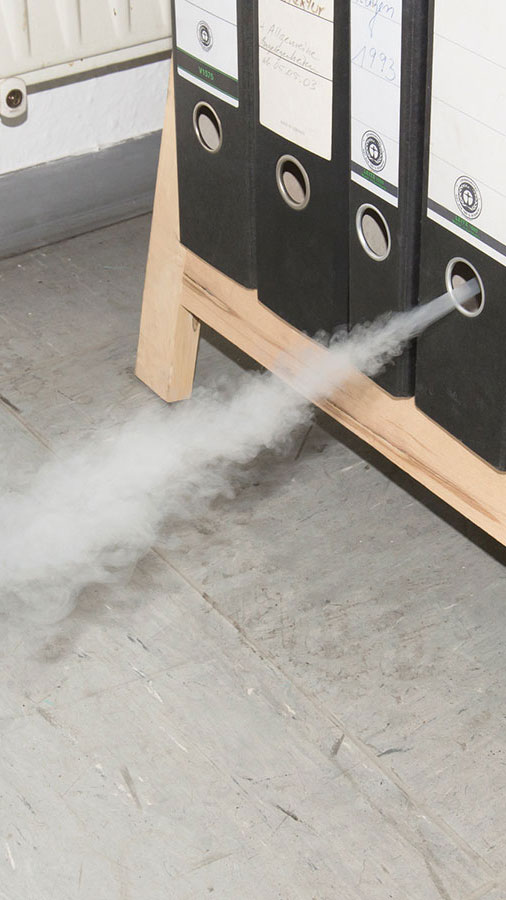 “It takes 7 minutes and 30 seconds to make a coffee on our induction plate. Niklaus’ perfume mixer adds a certain rhythm and when I write an email I apparently hit the keys hard. Sometimes the printer adds a signal sound. These are the constant noises framing our studio space. In between them hides a melody made of us interacting with computer programs and electronic devices. Every once in a while these loose elements fall into place and they coincide in something like a song.”

OBLIGATION: STUDIO is a soundpiece by Lukas Varady-Szabo with interactive visual score and incense.

OBLIGATION: STUDIO was first performed at a concert at Studio4ons on October 2, 2019. It will be released during a show on Radio Rietveld May 18, 2020.

SKOOBEEE focuses on Annika Kahr's work STRINGS in which members of a professional string quartet exchange their instruments after each act. The performance gradually falls apart and makes audible how fragile traditional conceptions of skill, control and beauty are.

It was released as an artist publication accompanying her solo exhibition THE BILLION YEAR SPREE at Flat Time House London in 2019. In the spirit of Flat Time House’s patron John Latham the publication questions the conventions and limits of a book: a narrative told by text and sound, not text and image; exisiting as virtual entity, not limited to a physical body.

THE BILLION YEAR SPREE was on view in Flat Time House London from March 8 to April 14, 2019. SKOOBEEE was released with a talk between Annika Kahrs, Gareth Bell-Jones and Marius Schwarz on April 6. 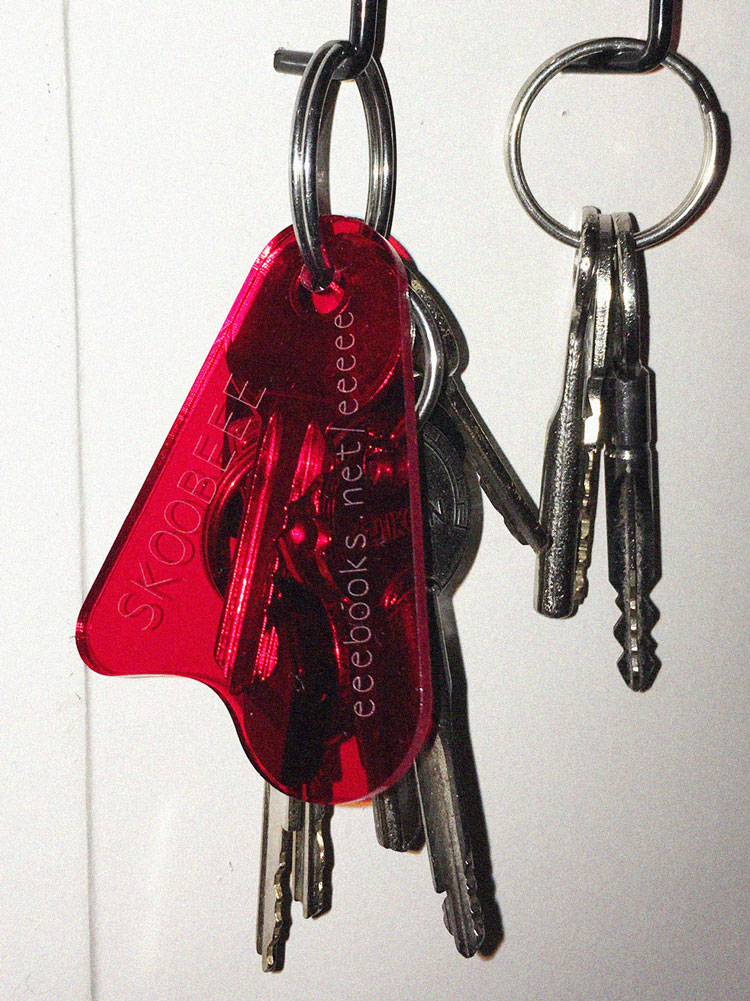 While tanning on deck, the sailor can’t be bothered by the siren’s sweet call. Down in the cabin Christopher confesses his feelings to James in a letter he should have written centuries ago. Below the surface of the ocean, protected by the darkness of time, Triton doesn’t have to hide his fear of shrimp. Back on deck the weary sailor falls in a deep sleep, riding dolphins in this dream…

This catalogue was published on the occasion of Charlott Weise’s exhibition HE AT SEA at Kunstfort Vijfhuizen 2018, which consisted of sail paintings installed in the space like masts at sea. Instead of documenting the exhibition, the catalogue consists of a series of digital drawings, capturing narrative, energy and humor found throughout her work. 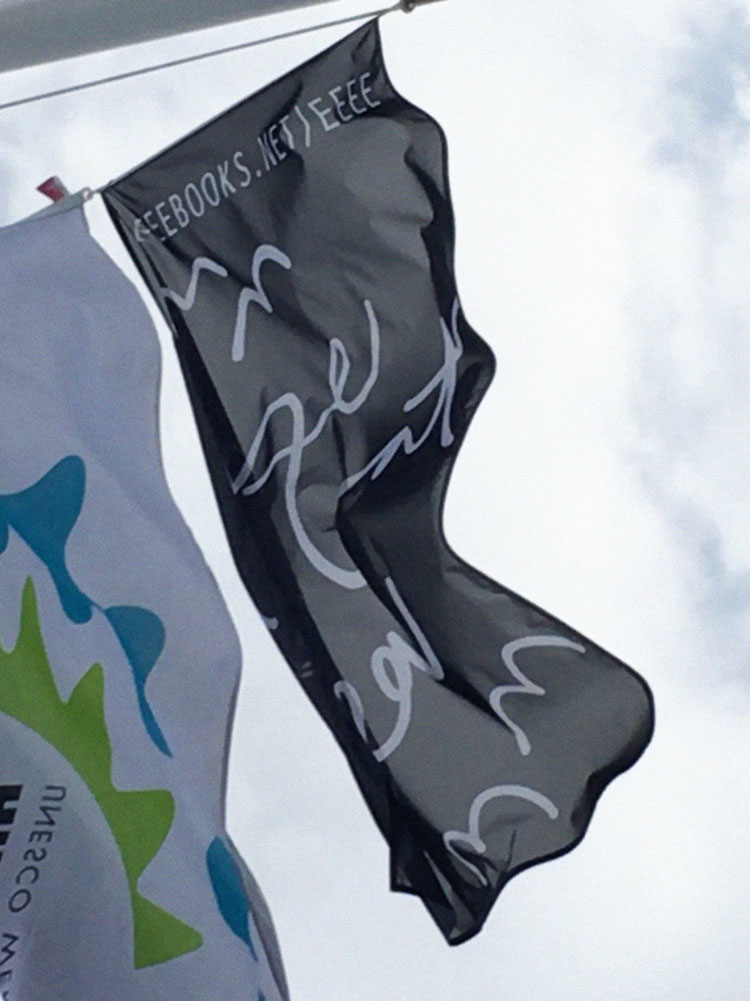 OUT OF THE FIRE

Words and finds on the fire of Casa Rosso, Amsterdam, 1983.

Short after Red Light District’s legendary casino and strip club burned down, stories started rumouring the streets. Someone heard something of someone. A secret tunnel. A bouncer in love with a dancer. Gasoline and jealousy. GASOLINE! “Zwarte Joppie,” how the the big-boss was called. Broken legs and arms. An elephant, that could not stop the fire. A perpetrator from Russia, persecuted murderer in the USA. Bystanders pulling the fireboat down the Gracht. Maltese knights, keeping their church wet, protecting it from the flames. And later a “rich cesspit” was found under the ashes.

All that and more, recalled by five eyewitnesses. Displayed word by word, which reads like listening to their stories first hand.

OUT OF THE FIRE was released on March 15, 2018 in San Serriffe Amsterdam. On March 17 it was shown at Annual Reportt in Copenhagen.

GETTING MONEY GETTING BOARDS

“I started skateboarding five months ago. I just liked it. I don’t have any idols. This is my first board. It’s from BAKER. This deck had been used by three guys before I got it. I exchanged an IPAD for it and I started skating. But it was an old, stupid IPAD. I colored the griptape blue because it was too dirty…”

GETTING MONEY GETTING BOARDS is a peek into the skate scene of Tbilisi, Georgia. Skating there, is what it must have been here a while ago. An expression opposing a conservative city. True commitment, given the struggle to afford and wait for equipment. Fun and friendship first, competition and style only later… But as everywhere, things are changing fast.

GETTING MONEY GETTING BOARDS was released with a reading at Skatepark NOORD on December 16, 2017. 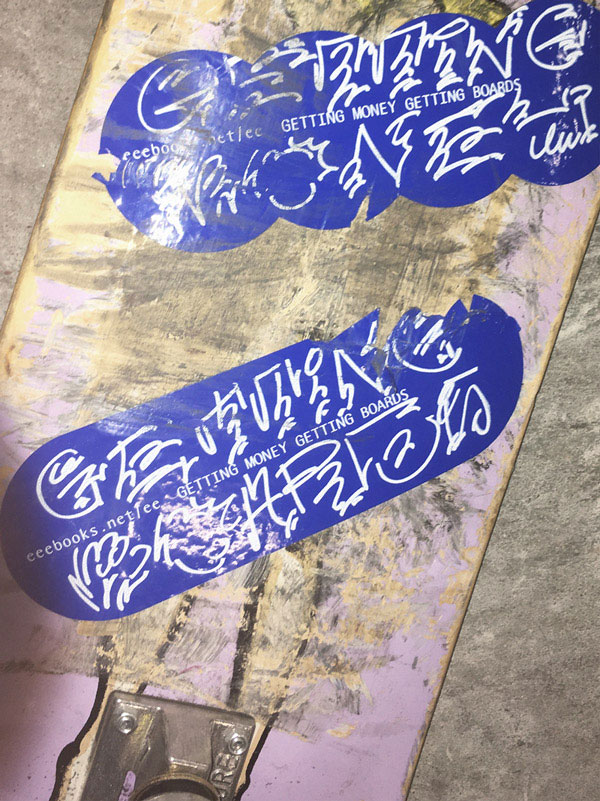 NO NEW MESSAGES is a digital fanzine that combines the music of Délage’s album LOVERBOY BEATFACE with the text messages the audience sent him during its release concert. The result reads and sounds like a collective poem: while Délage pours out his broken heart and sings lines like “In your arms I’ll be your boy, your one and only toy” — the audience replies with messages offering “Hey my parents are away 2nite…”, wondering “Am I pregnant?”, stating “I am on 🔥!”, or asking “Can I have a piece of swag?”.

NO NEW MESSAGES was released with a live performance in studio4ons on October 14, 2017. 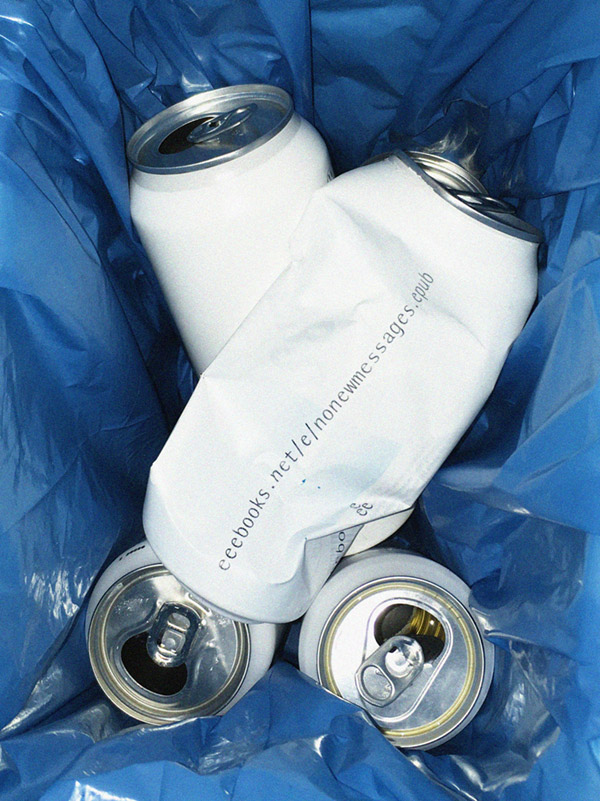 eee- is a digital publication initiated by Marius Schwarz.

The publications are developed in close collaboration with the authors who are musicians, artists, designers, writers. They document their often narrative and performative work, which otherwise would not be available to audiences after their original appearance.

The releases take place at public events, where the artworks are presented live and the download codes are distributed in the audience in the form of token objects.

JINGLE
With Till Hormann/Délage
Play